2 replies to this topic

Well, it certianly isn't a secret that Jedi Knight: Jedi Academy is out. The much anticipated sequal to Jedi Knight II: Jedi Outcast has finally graced gamers across the globe with its presence. And all I can say is "its about damn time!" 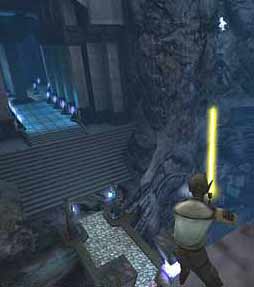 Not one for patience when it comes to games that I have spent what seems like forever playing, JK: JA was no exception to the rule. I recall the origional Jedi Knight, heck I remember going toe to toe with storm troopers in Dark Forces for crying out loud. This is a game series that is near and dear to my heart, and thankfully my hopes were not dashed with buggy game play, months and months of delays, or poor performance. All in all I was very pleased with what was offered at release. But enough random fiddle faddle, lets get down to the nitty gritty!

Anyone that has played Jedi Knight II: Jedi Outcast is already up to speed as far as gameplay goes. Pretty standard FPS setup with a third person kick out whenever you use your lightsaber(s). And come on, be honest... anyone who plays this game better have their lightsaber out 99% of the time. So perhaps that makes this title a TPS (Third Person Saber game).

The one huge drawback of JKII:Jedi Outcast was even fixed. In Jedi Academy there are thankfully NO missions that you have to trudge through without a lightsaber or force powers. Granted, you are a Jedi in training, so you don't start out with a lot of force powers, but it beats using a blaster! Well, that and the fact that your not stuck playing as Kyle. You can select from 5 different races to play as and can customize the hilt and color of your blade in the beginning. About half way through the game, you even get to opt for dual lightsabers or the saberstaff (think Darth Maul).

All of the outstanding elements of the previous game are persent and accounted for in the newest installment to boot! The outstanding audio effects are perfect, but how could they not be? When you work with Lucasarts, you get full access to their sound archives, so all of the saber clashes, blaster fire, and ambient audio are all dead on StarWars. 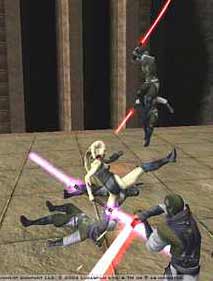 The graphics are about the same as Jedi Outcast. Perhaps a few minor adjustments to the engine, but really you are not likely to notice anything as a vast improvement. But to be honest, it's the action and the theme of this game that is most likely to appeal to gamers anyway. And Jedi Knight: Jedi Academy delivers what StarWars Galaxies can't (and wont). Any gamer who has their hearts set on running about the galaxy, lightsaber in hand fighting the forces of evil (or good) can get exactly what they are looking for in Jedi Academy. The entire game is about being a Jedi for crying out loud. What more can you ask for.

Another pleasant continuation from the previous Jedi KnightII was the presence of a really strong storyline. And when you have a good game, with good gameplay and a strong story behind it, it certianly helps keep you coming back for more. JKII: Jedi Outcast and now Jedi Academy are the only two Shooters to hit the market in recent memory that I have been compelled to sit down and play till I win (much to Mrs. Andrax's dismay). There are a few twist and turns, nothing to suprising, but it's good just the same.

The mission system is setup well. You pick missions as you progress to help locate some strange cultists who are gathering up force energy from various locations across the galaxy. Each mission you take allows you to put an extra point in a force skill of your choosing (light or dark). If you stray much into the darker (or GOOD COMBAT powers as I like to call them) then expect a talking to from Luke or Kyle. My only real mission gripe is that I thought that there could have been some more of them. Like all Jedi though, you will have your brush with the dark side. Towards the end of the game you will be faced with a choice. Embrace your anger and hate and strike down your opponent, or show compassion, forgiveness and understanding and stay on the light side. Or you can be like me and save the game before you make the choice and play through both ways.

The NPC AI is pretty well done for both friendly and enemy characters. However, there are times when you can back away from enemy Jedi and they will stop following you and stand there waiting for you. This can give you a distinct advantage while you heal and recover to continue the battle. Wether this is design or flaw I cant say. But it does seem odd that they simply stop following at a certian point. They do make up for their slight pathing problems with lightsaber skills. On the Jedi Knight difficulty level, they will cut your arse down in a heartbeat if your not paying attention. Especially as you get close to the end of the game. Your fellow students (when you fight alongside them) are pretty good as well. There were only a few times that I watched them gang up on an enemy and end up cutting eachother down in the process of trying to get to the Dark Jedi. 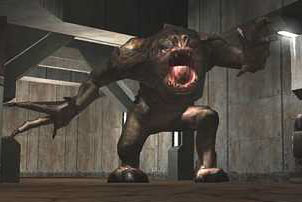 I neglected to keep track of my actual game playing time, but I would estimage that gameplay from start to finish is 30-40 hours tops. I got it installed on Friday and beat it Sunday on the Jedi Knight (or HARD) difficulty level. Replayability of Jedi Academy is there, but about the only thing you can look forward to is increasing the difficulty level and see if your skills with your saber can keep you alive. Multiplayer is certianly another option, but the Jedi Knight line seems to draw a great deal of undesireables. Pretty hard to find a decent server to play on, limiting the fun factor of MP quite a bit.

Overall this is a must play for any StarWars fan. If you liked any of the Jedi Knight games you will surely find something you enjoy about this title. It is more of the same, but I still feel comfortable saying "Keep em coming". Raven has found a great niche with this line, hopefully they will continue to do the line proud and we can look forward to Jedi Knight III!

Once the console opens, type "helpusobi 1" without the "" to enable cheats, once done, you can use the cheats listed below to do whatever you like.

Cheat Code Effect
g_spskill 0-3 This code changes the difficulty of the game; you can enter any number from 0 (for Padawan difficulty) to 3 (for Jedi Master difficulty). You?ll need to save and reload before this takes effect.

d_npcfreeze 1 This immediately freezes all NPCs in a level, allowing you to kill them at will. Enter the code again with 0 at the end to reanimate everyone.
give weapons Gives you all available weapons. You?ll probably need to save and reload to gain access to your new arsenal, especially if you use this code in one of the game?s earlier levels.

give health Restores your health to 100.

give armor Recharges your shields to 100.

give ammo Gives you maximum ammo for all weapons.

give force Recharges your force points to full.

Setforceall 1-3 Sets all of your force powers, including Light side and Dark side powers, to the desired level. Set it to three to become godly.

god This classic code makes your character invincible, although you can still die from falling into bottomless pits. Enter the code again to turn the effect off.

noclip Activates no clipping mode, which lets you walk through walls and fly. Enter the code again to turn the effect off.

npc kill all All characters other than yourself die. Note that this will sometimes trigger cutscenes, or end your game if you have a teammate that needs to remain alive.

victory Your character will perform a victory animation, which varies based on your choice of lightsaber. This doesn?t actually do anything, but it?s kind of cool to bind to a key for multiplayer mocking purposes.

g_saberrealisticcombat 1-20 This was everyone?s favorite code in Jedi Outcast, and it returns, albeit in a slightly changed form, in Jedi Academy. When this code is activated, your lightsaber?s damage will increase greatly, and the likelihood that a hit will sever body parts from your target will also go up. What?s more, you?ll be able to remove more body parts than just the hands; you may find yourself removing your foe?s arms, heads, or even chopping them in half. The effect has been muted somewhat since the previous game, though, so you might want to use a number higher than 1 to increase the lethality, and keep in mind that this does affect your enemy?s lightsabers as well, so be careful when dueling.

Map mapname This warps you instantaneously to the given map. For instance, to warp to the first level on Vjun, you would enter "map vjun1" in the console. Your force powers and arsenal will be unaffected, so you might need to use the above codes to adjust your power levels to make the level survivable.

"If ye love wealth greater than liberty, the tranquility of servitude better than the animating contest for freedom, go home and leave us in peace. We seek not your council nor your arms. Crouch down and lick the hand that feeds you, and may posterity forget that ye were our countrymen." --Samuel Adams
Back to Software Reviews